CLASS A MOTORS: Class A Motors are characterized by normal starting torque, high starting current, and low operating slip. The motors have low rotor circuit resistance and therefore operate efficiently with a low slip (0.005 < s < 0.015) at full load. These machines are suitable for applications where the load torque is low at start (such as fan or pump loads) so that full speed is achieved rapidly, thereby eliminating the problem of overheating during starting. In larger machines, low-voltage starting is required to limit the starting current.

CLASS B MOTORS: Class B Motors are characterized by normal starting torque, low starting current, and low operating slip. The starting torque is almost the same as that in classes A motor, but the starting is about 75 percent of that for class A. Designing for relatively high leakage reactance reduces the starting current by using either deep-bar rotors of double cage rotors. The high leakage reactance lowers the maximum torque. The full-load slip and efficiency are as good as those of class A motor.

Motors of this class are good general-purpose motors and have a wide variety of industrial applications. They are particularly suitable for constant-speed drives, where the demand for starting torque is not severe. Examples are drives for fans, pumps, blowers, and motor-generator sets.

CLASS C MOTORS: Class C Motors are characterized by high starting torque and low starting current. A double-cage rotor is used with higher rotor resistance than is found in class B motors. The full-load slip is somewhat higher and the efficiency lower than for class A and class B motors. Class C motors are suitable for driving compressors, conveyors, crushers, and so forth.

CLASS D MOTORS: Class D Motors are characterized by high starting torque, low starting current, and high operating slip. The rotor cage bars are made of high-resistance material such as brass instead of copper. The torque-speed characteristic is similar to that of a wound-rotor motor with some external resistance connected to the rotor circuit. The maximum torque occurs at a slip of 0.5 or higher. The full load operating slip is high (8 to 15 percent), and therefore the running efficiency is low. The high losses in the rotor circuit require that the machine be large (and hence expensive) for a given power. These motors are suitable for driving intermittent loads requiring rapid acceleration and high-impact loads such as punch presses or shears. In the case of impact loads, a flywheel is fitted to the system. As the motor speed falls appreciably with load impact, the flywheel delivers some of its kinetic energy during the impact. 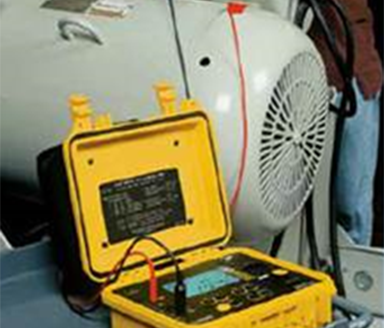